Lakeland Florida is a beautiful and historic city located just east of Tampa. Lakeland Fl is approximately 45 minutes away from downtown Tampa and just over 1 hour is the quickest time which you can depart Lakeland and reach downtown Orlando. Normally the morning and late afternoon traffic toward Orlando makes the drive a little longer. Either way you wish to drive it is toll free thanks to Interstate-4.

The city actually extends north and south of I-4. Typical of most of today's modern cities it is not square or circular rather it is intertwined with the local cities surrounding it.  In the northeast Lakeland extends all of the way to where the 570 reaches Interstate-4 while in the southwest Lakeland Fl reaches where Ewell Road and County Line Road intersect. That is an incredible 13.25 miles wide and makes Lakeland the most western city in Polk County Florida. In total there are 74.93 square acres that make up the city. 9.02 acres of that are beautiful lakes from which the city derives its' name.

Lakeland became and official Incorporated City January 1st 1885 just 24 years after the establishment of Polk County in 1861 . Florida had become a state in 1845 but like all states in the med to late 1800's Florida was still working out some issues. The train system reached Lakeland and much of central Florida by the mid to late 1880's and civilization was on the move forward.

Although John Hollingsworth and several others beat him to the area Abraham Munn did the legal work necessary to actually start the town. He bought the 80 acres that would later become downtown Lakeland. He actually platted the land in 1884 and shortly there after Lakeland was officially a city. He is honored with Munn Park which is naturally in the downtown area. 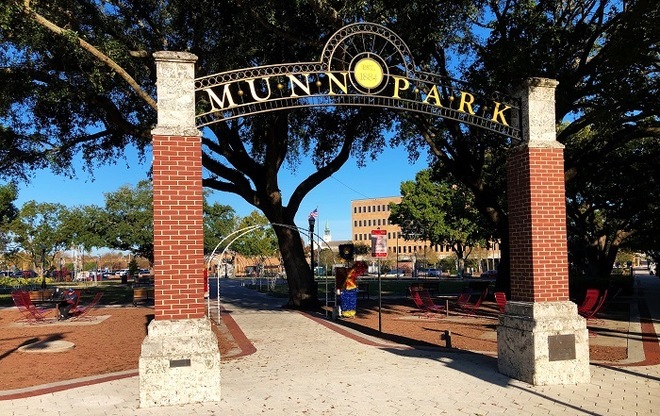 Mr. Munn named the city after the lakes which are nearest or in the downtown area. I do not believe he would have known that someday the city would actually encompass 38 named lakes. That number could even increase if some of the larger ponds would ever to get named. The lakes here are usually from phosphate mining pits which eventually fill with water or good ole Florida sinkholes which do the same. Technology was not as advanced when the mining boom in this city was in its early stages. That is likely why most of the lakes are under 20 feet deep.

More on those Lakes

The lakes here are a beautiful attraction and are definitely taken advantage of. You will find that parks and walking trails line the most popular lakes and good food is not far away. The most famous of the lakes and most commonly photographed is no doubt Lake Mirror. Although it is not a very large body of water is is certainly beautiful and very photogenic. If you have seen much of Lakeland online I am confident you have seen parts of Lake Mirror. Some of its features include Barnett Family Park and Hollis Garden on its' southern and southeast sides. On its' western shore is the beautiful Loggia and the famous Swan sculpture. The Frances Langford Promenade is the beautiful walkway that encircles the lake. On that walkway you will pass the often photographed colorful sculpture shown below. 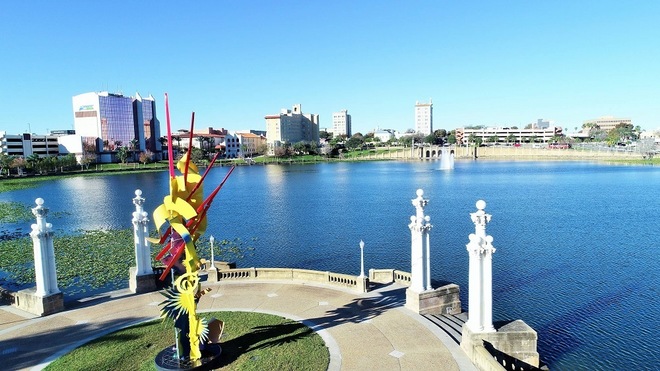 There are to many lakes in Lakeland for me to describe in this post. However there are a few others which should be mentioned but I will keep it to just one more for now. Lake Hollingsworth is certainly one of those. Lake Hollingsworth is around 1 mile south of Lake Mirror Lake Hollingsworth is a much larger lake having a surface area of 350 acres which is slightly over half a square mile. Lake Hollingsworth is also surrounded by attractions and a paved walkway known as the "Lake to Lake Trail". While on the trail you will see some beautiful birds that are quite used to being admired. It is not uncommon to get very close to them. On this path residents and visitors walk, jog, bike and all enjoy the beautiful scenery and lifestyle this city provides.

One of the notable places and attractions around the lake are the Florida Southern College on the north side of the lake. This beautiful and historic part of the city was designed by the famous Frank Lloyd Wright. Trust me the campus is much larger than it appears from Lake Hollingsworth Drive after all it has been here since 1922. But for now let's stay on the topic of what is around the lake.

Lake Hollingsworth Drive is the road which encircles the lake that it is named after. It a 3 mile drive around the lake. If you start on the northern side and go clockwise this is what you will see. On the eastern shore the primary attraction is the beautiful lake view homes that line the lake. Once you get toward the southern end you will notice the Lakeland Water Ski Club and boat ramp then the Lakeland Country Club. The Lakeland Country Club is a beautiful place to enjoy the lake from. There are quite a few tennis courts, a very nice pool and a couple of piers to venture out onto the lake.

The Local Contribution of Publix Supermarket

I could easily make this blog post 4000-5000 words and still not give honorable mention to this business but that would be a shame. The Publix Supermarket chain moved it's headquarters here from Winter Haven Florida in 1951 under the direction of George Jenkins the company's founder. The supermarket chain is not only responsible for giving many of the city's residents employment but for funding and contributing to city functions and attractions all around Lakeland Florida. Thankfully that included the President of Publix Mark Hollis in 1998 having the business fund and operate Hollis Gardens which is a definite must visit site on Lake Mirror.

If you choose to search the homes for sale in Lakeland Florida you will no doubt come across this site. One of the ways we say thanks to Publix for their contribution to the city of Lakeland is mentioning the travel distances to the local Publix Supermarket from each of the 150 communities we have covered on this site. It does not hurt that Publix is also the best supermarket chain in the United States in our opinion.

We hope that you enjoyed this blog post and are possibly more interested in the city because of it. Lakeland is one of the fastest growing cities in Florida and for many reasons not mentioned here. Hopefully soon we will be working together purchasing your new home in Lakeland Florida.

Popular tags on this blog

All listing information is deemed reliable but not guaranteed and should be independently verified through personal inspection by appropriate professionals. Listings displayed on this website may be subject to prior sale or removal from sale; availability of any listing should always be independent verified. Listing information is provided for consumer personal, non-commercial use, solely to identify potential properties for potential purchase; all other use is strictly prohibited and may violate relevant federal and state law. The source of the listing data is as follows: | Stellar MLS (updated 6/24/21 11:49 PM)
Featured Listings

$549,500
4 BED
2 BATH
"A Step Above the Rest with Quality Displayed Throughout" describes this lovely home located on nicely landscaped large ... Read More

$549,900
4 BED
4 BATH
Upon entering the Beautiful Gated Estates of Auburndale Community, you will be greeted with beautiful tree lined street... Read More

$1,250,000
3 BED
3 BATH
Here is an incredibly rare opportunity to own a truly one of a kind property! The home possibilities here are endless an... Read More

$649,999
5 BED
5 BATH
This brand NEW CRAFTSMAN STYLE home is located in the well established neighborhood of Cherokee Place and is close to ev... Read More